Plastics polluting Fairhaven beach on Victoria’s Surfcoast highlights a modern day environmental curse. Renowned for its rolling surf, rock pools, rugged beauty, imposing sand dunes and the Mad Max House, the beach is now choking with plastic and other non biodegradable rubbish washed up with the changing currents and tides. The situation made worse by the frequent artificial opening of the Painkalac estuary to the ocean according to a local marine biologist.

Fairhaven beach is popular with surfers, swimmers, paddlers, walkers, holiday makers, day trippers and tourists from far and wide.  Some of Australia’s greatest surfers have called this beach home.

From a distance the beach looks pristine but closer up the rubbish is obvious and confronting.  For someone who has holidayed at Fairhaven beach for the last 40 years, the situation is depressing.

During a recent six week stay I picked up any plastic I saw on my daily walk from the Fairhaven Surf Life Saving Club ramp to the Split Point Lighthouse, a distance of around 500 metres.  It was an interesting exercise watching my crazy collection grow.

As if common plastics aren’t enough, the other major pollutant is a form of plastic, polystyrene (or styrofoam) sometimes cunningly disguised as cuttlefish on the beach.  The scenes of broken polystyrene cups, meat/produce trays, fishing paraphernalia and polystyrene packaging is appalling.

As I watched, a piece of polystyrene packaging broke up ball by ball as the wind and waves pushed it against the vegetation on the dune base. When sea birds and marine creatures mistakenly eat this polystyrene debris the consequences are perturbing.

When eaten, foamed polystyrene has been demonstrated in experimental conditions to reduce fertility, decrease energy and alter juvenile development of invertebrates at the base of the marine food chain. Like other plastics, it also occupies space in animals’ stomachs that should be available for food, sometimes creating a false feeling of fullness or causing a physical blockage that can lead to internal damage.

Furthermore, foamed polystyrene has raised significant concerns relating to environmental and human health because its chemical components (e.g. styrene) have been linked to serious diseases, including cancer.

The Chupa Chup company was founded by Enric Bernat in 1958 and to begin the lollipops were produced with wooden sticks, unfortunately, the company later switched to plastic.

Kojak, played by Telly Savalas, was TV’s popular cop in the 1970s.  He was constantly seen sucking on a Chupa Chup while fighting crime in New York City which undoubtedly helped boost their popularity – unfortunately.

In the 1980s, to boost sales, the company entered the anti-smoking campaign to encourage adult consumers with the slogan “Stop Smoking, Start Sucking”.

The colourful lollipops, with their Salvador Dali designed logo, are usually placed near cash registers to tempt both children and adults.  They are economical, convenient and popular the world over. But, they are a problem the world over because the sticks have become a pox on the environment.

My advice. Stop buying the ‘Chups’ until the Chupa Chup company replaces the plastic sticks with wooden ones.

Another crazy collection from Fairhaven beach consists of ropes and ties, probably from the fishing industry or boat related. Anything that can tangle and knot spells doom for unsuspecting marine creatures such as penguins, fish and sea birds who can find themselves wrapped and trapped in loops of nylon thread and other sinister filaments.

For Fairhaven’s Hooded Plovers (often referred to as ‘Hoodies’) who nest above the high tide mark or among the dunes, these fibres are particularly hazardous. Declared a ‘vulnerable’ species in Victoria, the ‘Hoodies’ go foraging for molluscs, crustaceans, seeds and insects along the sand, shore and reef.

Ensuring a safe environment for these vulnerable birds is difficult enough from obvious threats like dogs off leash, bigger birds and foxes.  Now they are threatened with entanglement in dangerous fibres from old ropes or fishing line lying on the beach.

The range of rubbish collected over six weeks, over 500 metres, on what looks like a pristine surf beach is staggering. 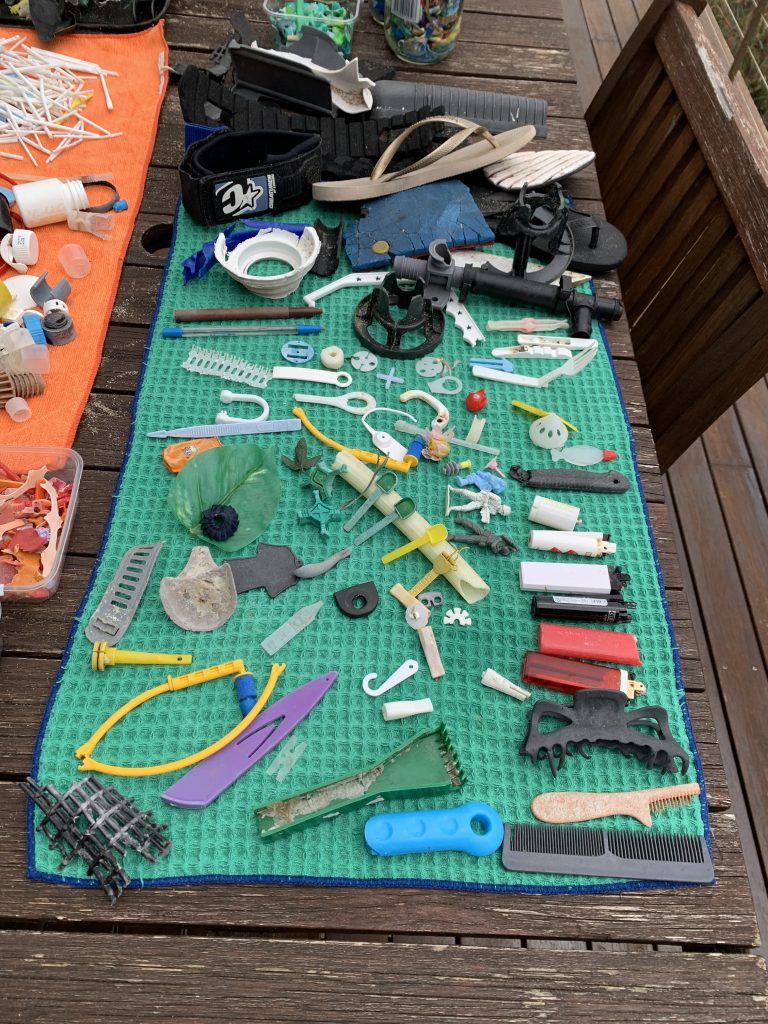 Apart from the small pieces of plastic and polystyrene the crazy collection included:

Where is this Crazy Collection of Plastics Now?

The collection is now in the custody of local Fairhaven/Airey’s artist Bin Dixon-Ward  who, using digital technology, makes extraordinary jewellery that in her words “reflects the times and places in which we live”.