Edward Johnston KEARNEY (1876-1925), known as ‘Ned’ has an interesting WW1 War Service record. He was 40 years old when he joined the AIF in July 1915 probably because he was unemployed and had a wife, Susan and young dependent daughters to support in Healesville, Victoria. His eldest son Albert signed later in the month. Edward didn’t like catching ships or marching. But he did like a drink. He was a villain. He was my Great Grandfather.

Edward J Kearney volunteered for the AIF on the 5th July 1915. He was 40 years old when he joined and told a fib when he answered ‘no’ to ‘Have you been convicted by the Civil Power?’ He was one of the rare ‘Father and Son’ to join up.

At the Broadmeadows training camp, Private Kearney No. 1678 was assigned to the 10th, 12th and finally the 22nd Battalion.

Edward had great trouble catching boats. On the 8th of February 1916, he failed to ship out with the 22nd and was transferred to the 23rd Battalion that left Melbourne on the 7th of March. At Fremantle, he failed to re-embark on the 16th of March and was transferred to the 51st Battalion the next day but then he failed to re-embark in Colombo Ceylon with the 51st on the 30th of March. Private Kearney was ‘placed’ on board HMAT A40 Ceramic on April 1st, 1916 and disembarked in Egypt to join his battalion with 75 partially equipped reinforcements on the 16th of April.

Edward was quickly in trouble. On April 20th HRH the Prince of Wales inspected the Brigade and witnessed a mock battle where, due to the heat, troops in full battle gear walked to the ‘enemy trench’ and leisurely occupied it to the chagrin of the officers. Several cases of whisky intended for officers and royal visit were stolen by 51st Battalion cooks and the 4th Division horse groom. Private Kearney was AWL (Absent Without Leave) from 23 to 24 April and forfeits 3 days’ pay. Was Edward hung-over? Following a swim meet for the 1st ANZAC anniversary the 51st undergo a route march to dispel the effects of the stolen whiskey.

After training in Egypt, the 51st Battalion are transferred to France. Private Kearney has an aversion to long marches. This could be a problem because of his age or that the English boots that the Australians were equipped with were unpopular as the high sides caused blisters. The 51st conduct a Route march of 7 miles on July 17 followed by 10 miles the next day. Edward is AWL on the third day of 12 miles. The 19th of July is also the day his son Albert is wounded at Fromelles.

For his second AWL charge, Edward is awarded 14 days of Field Punishment No. 2 and forfeits 15 days’ pay. Field Punishment No. 2 consisted of the convicted man being shackled in irons. He could only be thus fixed for up to 2 hours in 24, and not for more than 3 days in 4, or for more than 21 days in his sentence. It was carried out by the office of the Provost-Marshal, unless his unit was officially on the move when it would be carried out regimentally i.e. by his own unit.

On August 14th Edward sees his first action when the 51st Battalion is repulsed at Mouquet Farm during the Somme offensive suffering 300 casualties. They are relieved on the 17th and march to Warloy for 2 days’ rest. The battle at Mouquet Farm had a major impact on the morale of men.

On the 26th of August the 51st march 8.5 miles, rest on the 27th and then march Herissart to Vadencourt Wood via Contay but Edward was absent from the final parade on the 28th and awarded another 21 days of Field Punishment No.2.

The 51st are back in action at Mouquet Farm on September 3rd where they capture the position but had lost it again by the end of the day. B and D companies have been destroyed and Edward is one of the 353 men available at roll call in Albert.

On September 6th, the 51st are marched to Warloy and then the next day, marched 14 miles to Amplier. The third day of marching to Authieule for a train to Gedesaevelde and another march to Steenvoorde sees Private Kearney AWL again.

The authorities have clearly lost patience and Edward is ‘in confinement’ from the 8th to the 18th of September. A Field General Court Martial is held on the 19th and its findings are confirmed by Brigadier General Glasgow 13th Infantry Brigade on the 24th.  Edward is awarded 90 days of Field Punishment No.2 and forfeits 11 days’ pay. For his time in confinement, he forfeits 10 days’ pay. He is detained at Reninghelt to undergo his 90-day sentence from September 25th, 1916.

During his sentence, Edward falls ill with influenza and is transferred to the 7th Field hospital on October 16th. By the 26th he is on a hospital ship to England where he spends the winter of 1916-17 in various hospitals. A medical board review on December 9th finds him unfit for further service due to heart disease (Morbus Cordis).

On March 17th Edward embarks on the Beltana for return to Australia where he arrived on April 12, 1917. He was discharged from the AIF as Medically unfit – Disability on July 2nd, 1917.

Ned had five dependent daughters at home.  The photo below shows four of his girls dressed in their Sunday best posing for a photograph taken by an official AIF photographer as a gesture to fathers serving King and country. Lily, his eldest daughter, is absent because she was given the job of getting her younger sisters ready for the photoshoot. After cleaning their boots, washing and ironing their frocks and curling their hair in rags she didn’t have time to get herself ready.  The photo was sent to Ned while he was at the Front. 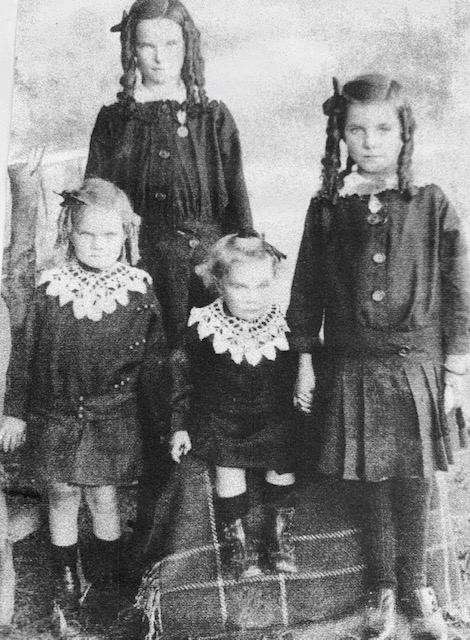 Thank you to Roger HEEPS, my cousin, for allowing me to publish his detailed and colourful story about our Great Grandfather