Flu - A Common Enemy on the Battlefields in WW1

Was it Spanish Flu?

The short answer is No.  It was not made in Spain.  But the first news of this “mysterious malady” with flu like symptoms came from Spain in June 1918.  The disease gained VIP status when the King of Spain, Alfonso XIII, became very ill and it was crowned ‘Spanish Flu’.

There is also another reason. Spain maintained its neutrality during World War One (WW1) and news from there  was uncensored.

Countries involved in the conflict didn’t want their enemies knowing that a disease spreading rapidly throughout the ranks was affecting their fighting strength. Such news was military hush hush for obvious reasons. The news eventually broke when things went quiet on the Western Front.

British war correspondents Philip Gibbs (‘Daily Telegraph’) and Perry Robinson (‘The Times’) both reported in July 1918 that the German offensive had probably been delayed due to influenza ravaging German troops on the battlefields.

Not Front Page News In Australia

News of the “mysterious malady” spreading in Spain didn’t make front page news in Australia.  The Australasian newspaper put the story on page 24.

Forty percent of the population is stricken.  The railways, tramways, factories, newspaper offices, schools and theatres have been seriously disorganised owing to the depletion of their staffs, and many have had to close.  Some of the symptoms resemble influenza, but on many cases there are sudden fits.  King Alfonso and several of his Ministers are ill.  There have been few deaths. (Australasian, 1 June 1918, p24)

Soon there were reports of 700 deaths in Madrid and Spaniards by their thousands were suffering.

On the Battlefields of the Western Front

My Grandfather, Private Allan George Holland, of the 37th Battalion was hospitalised with influenza from 4 to 12 February 1918. A time in winter you would expect influenza to be about whether in battlefield trenches or towns. 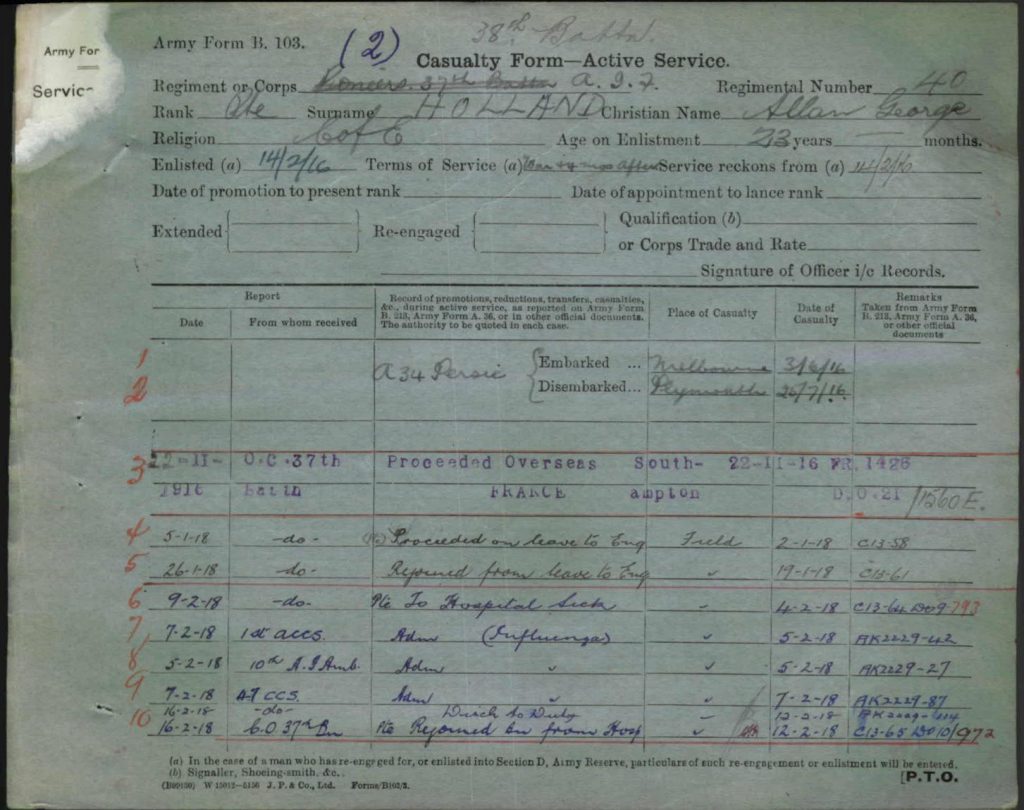 Prior to his hospital admission he had been on leave in England from 2 to 19 January 1918. It was unlikely he brought influenza back to the trenches from England as the usual incubation period for seasonal influenza is 1-4 days. The influenza he acquired was probably already circulating in the trenches. A little precursor to the deadly Spanish variety.

It would be interesting to know how many other Western Front soldiers contracted influenza before the Spanish flu struck in the unseasonal spring and summer months of 1918.

I am not a virologist but I count my Grandfather lucky to have had influenza before the Spanish flu raged through the trenches.  Perhaps it gave him some form of immunity to the deadlier influenza virus that was to come.

In fact an analysis of the risk factors of 1918 pandemic influenza in the Australian Army revealed that the later the men enlisted the greater the risk of mortality.  There was a protective effect of acquired immunity from previous exposure to influenza viruses and endemic bacterial strains on the battlefields. My Grandfather enlisted in 1916. So he was lucky.

Where Did Spanish Flu Begin?

One thing we know for sure is that no one knows for sure.

In November 1917 a respiratory virus broke out in northern China killing many people in villages along the Great Wall. Chinese health officials later identified the disease as identical to Spanish flu. At the time British and French officials were in the area mobilising Chinese labourers to work behind British and French lines on the Western Front.

Known as the Chinese Labour Corps, 96,000 men were soon transported to Europe via Canada. Their transit across Canada in sealed railway carriages was a secretive undertaking due mainly to local prejudice against the Chinese.

Historian Mark Humphries found medical records that showed over 3000 Chinese workers, ended up in medical quarantine with flu like symptoms in Canada. They arrived in France in early 1918.  Hundreds of these workers died from respiratory illness at the Chinese hospital at Noyelles-sur-Mer according to records Humphries uncovered.

Camp Funston was an overcrowded American military training base in Kansas stationed under the path of migratory birds notorious for spreading Avian influenza.

The award for being the first documented case or Patient Zero goes to mess cook, Albert Gitchell.  He came down with flu-like symptoms in the morning and by lunchtime 107 other soldiers were also sick.  This was 11 March 1918.  Within five weeks over 1000 soldiers became infected and 47 died.

The 1000 plus American soldiers in various stages of convalescence and with others probably incubating the disease went to France with the enormous American military contingent of one million. They arrived carrying their kit bags, but also carrying flu microbes which escaped into the trenches. After their arrival flu spread rapidly throughout the trenches before escaping into wider France, England, Germany, Spain and beyond. The only place on earth spared was the isolated river island Marajo, in Brazil’s Amazon River Delta.

Some believed Germany had released the disease in the trenches via its ‘poisonous clouds’ and others via their U-boats.  After a widespread outbreak of influenza along the Atlantic coast official warnings came from Washington  saying that German U-boats were responsible.  A Reuters telegram said:

The Chairman of the Health Section of the Shipping Board said today that it was known that men landed from German submarines, and it is quite possible that germs had been released in theatres and churches.  It is recalled that influenza was observed in Spain immediately after the visit of the U-boats. (Sydney’s ‘Sun’, 21 Sept 1918, p1)

We don’t know for sure where Spanish flu originated, but we do know the inextricable link between the spread, and  the millions of WWI soldiers.  Crowded into army barracks, military camps, trenches and then troopships the circumstances provided the perfect battleground for the disease to multiply and spread.

Spanish flu caused the deaths of 100,000 mainly young soldiers and affected millions more rendering them ineffective by putting them in bed rather than on the battlefield.  The flu was more deadly than any military weapon.

The Spanish Flu Story in Australia