Searching for the old O'Leary Castle

The O’Leary Castle of Inchigeelagh, or ‘Carrignacurra’ castle is the last remaining O’Leary castle. Built in the 16th Century it stands beside the picturesque River Lee in a remote part of County Cork.

Googling for O’LEARY information unearthed an advertisement saying that ‘Carrignacurra’ Castle in Inchigeelagh, County Cork had been sold. The Castle, a four-storey tower house built in the late 16th century was apparently the “seat of the O’Leary family”. It became a must-see on our Irish road trip but it meant a drive into a remote part of County Cork.

Heading north-west from Cork city and despite putting Inchigeelagh into ‘TomTom’ we became lost in a maze of narrow, winding roads, T-junctions and intersections with no signposts. Imagine driving here at night! Temper frayed from the O’Leary in the driver’s seat. Eventually, we came across a man building a dry stone wall. “Can you tell us where we’d find the O’Leary Castle?” we asked. “No! But I could build you one,” he said with typical Irish humour.

After many twists and turns, a sign emerged saying “The Parish of Inchigeelagh” with a picture of a castle.
Sure enough, it was ‘Carrignacurra’ castle and the sign said it was the first O’LEARY Castle to be built. It is also the last remaining castle of the O’Leary clan.

Side-tracked by a Holy Grotto

Before driving on something caught our eye to the right of the sign.  There was a tiny waterfall and an intriguing natural rock formation adorned with religious statues and offerings. We had found, by accident, the Rossmore Holy Grotto.  The Blessed Virgin Mary appeared to Fiona Tierney in this place from 1987-1997. Mary told Fiona that Her son Jesus had blessed the stream’s water: “Drink from it and take it home to the sick.” I took a sip – of course

Back on the road and before long we could see the towering castle. It was an imposing sight through the trees as we approached the village, but it wasn’t easy to get to. After asking directions we again found ourselves driving along narrow local lanes not registering with ‘TomTom’.

Eventually, the castle came into clear view. Wrapped in ivy and standing in an overgrown field beside the River Lee it oozed medieval charm. We parked the car beside a derelict bridge spanning the river and walked toward the castle watched on by a nearby farmer.  Noticing his interest we wandered over and asked if we could look inside the castle and assumed he meant OK when he shrugged his shoulders and said: “Best to seek permission first than to seek forgiveness later.”

There was nothing keeping us out of the castle, so we risked wandering in. The previous owners had started to renovate but it seems they had surrendered and laid down their tools, overwhelmed by the level of work involved.

The winding, narrow, stone staircase beckoned but with only a phone for light and no handrail, it was a hazardous exercise. I managed to get to the second floor but felt increasingly uneasy. There was no way I could climb any further. What if I came face to face with a large Rattus rattus?  After turning around I tentatively made my way down wishing there was a safety rail to grab rather than the wall for balance.

We didn’t stay inside for long, but standing in the dark and silence surrounded by the thick stone walls we felt connected to the old O’Leary families.They were brave people, adhering to their Roman Catholic faith after it was outlawed during the Reformation. But imagine their fear and terror during those bloody days of the Cromwellian invasion.

According to Iain Gray’s booklet on Irish families, O’Leary chief, Auliffe O’Leary and his kinsman Mahon O’Leary became rebels and travelled northward to fight in the Nine Years War with the O’Neill’s. The rebels successfully employed guerrilla warfare tactics against Crown forces in several major battles. However, the resistance didn’t hold up.  The O’Learys and other rebels were punished for their active role in the rebellion by having their lands  confiscated.

A sign at the five-hundred-year-old local cemetery said it took many years for Reformation changes to “… reach remote places such as Inchigeelagh, and the local Chieftains, the O’Learys and their followers, clung fiercely to their old Religion. After 1700 the old lands of the O’Learys were sold by the Hollow Sword Blade Company to a number of new Protestant Landlords, and they, in turn, brought in Protestant tenants, when they could be persuaded.” 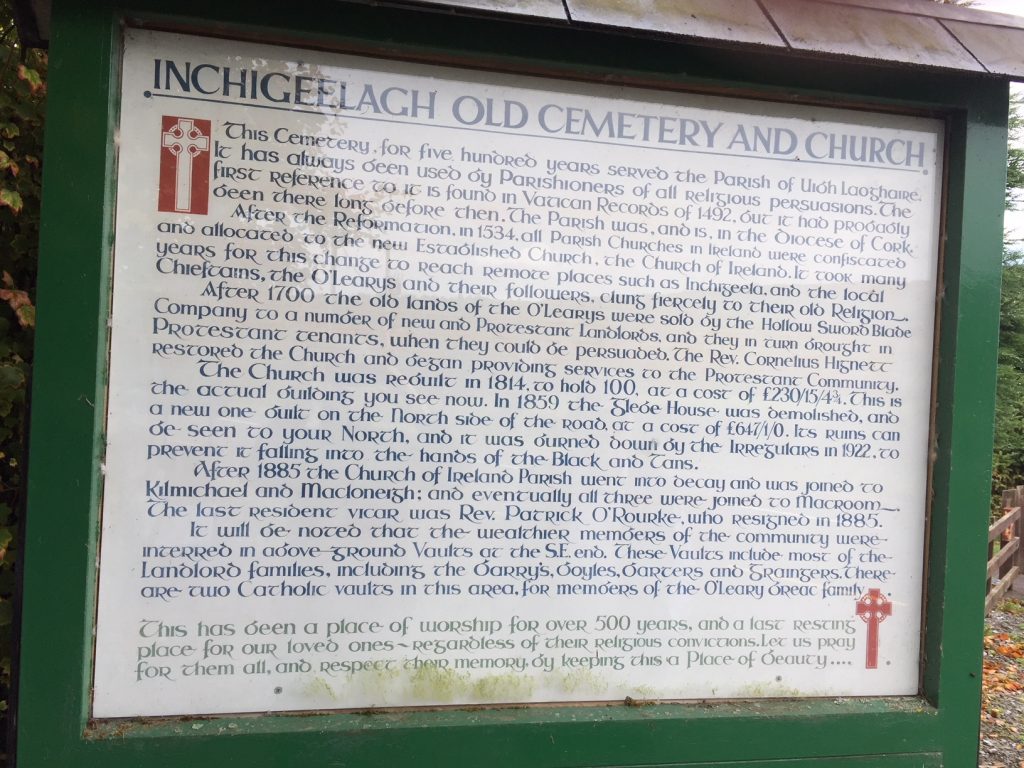 The Old Parish Church of Inchigeelagh and Graveyard

When we walked into the old church ruins and graveyard at Inchigeelagh we knew we were in O’Leary territory as  ‘O’Leary’ headstones were everywhere.

If you are searching for O’Leary ancestors the old Inchigeelagh church graveyard is  good place to start along with Creedon’s hotel.

The Future of the O’Leary ‘Carrignacurra’ Castle – A New Reformation

We discovered that Americans bought the Castle and will continue a restoration process. Hopefully, they are interested in preserving and respecting the history contained within the walls and in some small way keep the O’Leary legend alive.

My local chieftain (I let him think that) and husband Tony O’Leary (O’Grumpy for short) was a bit chuffed about finding the O’Leary lands, their castle and to walk in his ancestors’ footsteps.

1. Iain Gray, ‘O’Leary – The origins of the O’LEARY family name and their place in history’, LangSyne Publishing, 2016

Revised and adapted from the story ”An Irish Road Trip’ I wrote for The Ancestral Searcher, Vol. 41 No.4 December 2018, The Heraldry & Genealogy Society of Canberra Inc.