A Hidden Graveyard in the Snowy Mountains

The Yarrangobilly bush cemetery is hidden away at the end of a bush track off the Snowy Mountains Highway in the Kosciusko National Park.  This peaceful little patch in the Australian bush is the final resting place for some of the pioneers who lived in this area.

At home amongst the gum trees and native grass and flora some of the graves are adorned with a European touch. Daffodils, jonquils, and snow drops emerge in the Spring in a colourful display symbolising perhaps that life springs eternal from these old bulb plantings.

A National Parks and Wildlife sign at the entrance to the graveyard lists the pioneers known to be buried here along with their date of death and their age.

Of the 21 names six are infants aged between 18 days and 18 months. There was no escaping the terrible scourge of infant mortality that cast its dark shadow over many pioneering families in those days.

The cemetery dates from around 1860 when the Yarrangobilly Village was surveyed not long after gold was discovered in Kiandra 25 miles (approx. 40 kms or a day’s ride away) down the road.  The village was proclaimed nearly 30  years later in 1889. You can access the historical maps of Yarrangobilly via the NSW Land Registry Services  Historical Lands Record Viewer which show the location of the cemetery in relation to the village.

Yarrangobilly was the gateway to the goldfields by virtue of being the last stopping off place on the main route to the Kiandra diggings after Gundagai and Tumut. This route through Yarrangobilly was considered the best and most passable.   The other route to Kiandra via Lobb’s Hole was shorter but extremely dangerous to both horse and man.

The cemetery comprises seven sections, with the Church of England and Roman Catholic the largest and the Jewish section the smallest.  The remaining sections are for the Methodists, Presbyterians, Independents, and non-Sectarians.

Resting in Peace – Some Personal Stories

William (Edward) Leigh, 35 years – One of the first to be buried in the Yarrangobilly bush cemetery

The earliest burial on this list is 35 year old Edward Leigh on 17 May 1861.  Information about his unexpected death (and the weather) appeared in the Maitland Mercury on 28 May 1861 where he is referred to as “William” Leigh.

SUDDEN DEATH. –On the morning of the 17th, a packer, of the name of William Leigh, died suddenly, at the Travellers’ Home, Yarrangobilly, in the Tumut district, about twenty miles from Kiandra. He was on his road to Kiandra, and in the employ of Mr. David Winton, of Gundagai. He appeared quite well the evening before, but about seven a.m. he was seized with shivering and other symptoms which led to the supposition that death ensued from disease of the heart. -Weather fine and frosty. – Herald’s Correspondent. (Maitland Mercury and Hunter River General Advertiser, 28 May 1861, p3)

‘Brownlie’ was a household word in Yarrangobilly.  From the earliest years Alexander Brownlie, Providence’s husband, was connected to vast tracts of land in the area.

Providence died from influenza which had advanced to sepsis. In an article after her death she was remembered as a kind and benevolent lady who built and sustained a life in the harsh wilderness environment. 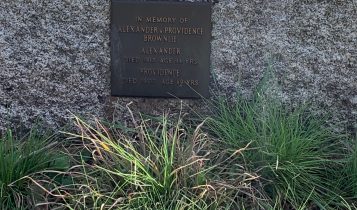 He started with humble beginnings but Scottish born Alex (Sandy) Brownlie led a remarkable and adventurous life in the Snowy high country. A butcher by trade, he headed to the Ovens Goldfields after arriving in Melbourne in 1852 where he continued his butchering work. He rose from a butcher to a grazier with his astute selections of land and property in the Yarrangobilly area and later the Yarrangobilly village where he had a hotel and various town allotments.

A tough Scot and hardened bushman he survived for eight days “on water and smoke from a pipe” when he became lost while prospecting in the mountains near Tumut when he was 76 years old.

Not long before he died at the age of 97 years Mr Brownlie suffered terrible injuries from burns after he over balanced and fell into the fire at his daughter and son-in-law’s home in Yarrangobilly.  He survived for 16 days with help from the local doctor but it was a painful end for the stoic pioneer.

The sudden death took place at Yarrangobilly on Saturday night, 24th April, of Mr William James Lilywhite.  Deceased, who was 67 years of age, was well known in the Narrandera district.  The interment took place in Yarrangobilly cemetery on Monday afternoon. (Narrandera Argus and Riverina, Tuesday 4 May 1920, page 2)

DEATH FROM THE BURSTING OF A BLOOD VESSEL.—A man, named Henry Walter Hayes, who was lately employed on the Yarrangobilly Station, met with his death on Wednesday last, from the effects of a ruptured blood vessel. All the particulars we can glean, are as follows: —

Deceased had been ailing for the past nine or ten months, and had been attended by Dr. Austin, but latterly had not received medical advice, in consequence of being so distant from town; be had been complaining for some two or three days before of weakness, and suddenly on Wednesday last, broke a blood vessel, which being of a dangerous nature, the poor fellow soon after breathed his last.

He was a native of South America, and arrived in the colony about the year 1840, and was believed to be 35 years of age. We have been desired to mention that he has a sister, named Webb, who is supposed to be living at Cullamina Station, on the Murray. (Tumut and Adelong Times Monday 25 June 1866, page 2)

MR. W. H. HARRIS.
On Thursday night last, Mr. William Hamlyn Harris (brother of Mr. H. L. Harris, of Wermatong), after months of patient suffering, through which his devoted wife nursed him unremittingly, crossed the “silent river,” at the age of 53 years, the cause of death being paralysis and heart affection. Dr. Mason used all remedial measures, but the Reaper’s fist was not to be gainsaid; and thus passed away from earth one whom to know was to respect, a fond husband and indulgent father, and one who for ten years enjoyed the confidence of his employer, Mr. Whitty, of Tarramia Station, on the latter’s Gooramgorambla Station. Latterly, Mr. Harris obtained a nice little homestead at Yarrangobilly, where he died, and was buried on Saturday last. Mr. H. W. Hoad made the coffin which was forwarded to Yarrangobilly on Friday, and the funeral rites were administered by Rev. T. E. Owens Mell. Deceased leaves behind him a sorrowing wife, two sons and five daughters, and a numerous connection in Tumut, to mourn their loss. We tender to all our deepest sympathy. (The Tumut Advocate and Farmers and Settlers’ Adviser, 28 Nov 1905)

Nothing really remains in the old Yarrangobilly Village except some ghostly brick foundations of long gone buildings, a couple of rusty old tanks, remnants of old backyards and an eye catching  hand made memorial above the grave of an infant named Franco Da Pozzo who died on 8 September 1957 aged 19 months. A parent probably etched the message “We Never Forget You”  into the concrete at the back of the memorial, the same message also conveyed by the drift of daffodils surrounding the grave – a joyful and everlasting tribute to the infant boy when they appear every Spring. 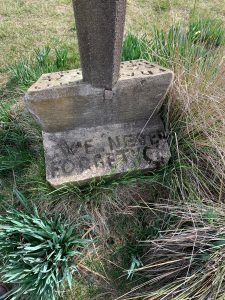 A story on the old Yarrangobilly village is coming soon.  Watch this space.